Prince Jeladet Ali Bedir Khan (Kurdish: Mír Jeladet Alí Bedir Xan, میر جه‌لاده‌ت عالی بدرخان), also known as Mír Jeladet, was born 26th April, 1893 in Kayseri, a suburb of Istanbul, Turkey. He was the second oldest son of Emín Ali Bedir Xan and Seníha Xanim Cerkez. His father, the son of the Emir of Bedir Xan, was a famous politician at the time of the Ottoman Empire. For most of his life, Jeladet Alí divided his time between France, Germany, and Syria. He held a master’s degree in law from Istanbul University and completed his studies in Munich. A member of the European literati, Jeladet spoke Arabic, Turkish, Kurdish, German, French and possibly Greek.

It is well documented that he and his younger brother Kamuran Alí (1895-1978) accompanied Major Noel in his travels through Kurdistan during 1919. Noel was a British intelligence officer whose main assignment was to assess the possibility of the creation of an official nation of Kurdistan. Major Noel was as pro-Kurdish as he was anti-Kemalist.

Aware of the Bedir Xans’ activities, Mustafa Kemal correctly accused Jeladet and his brother Kamuran of opposing the Kemalist movement in Anatolia. Jeladet left Turkey for Egypt in 1923 when the Kemalists declared the new republic.

In 1821 Jeladet’s grandfather, Emir of Bedir Xan, had become prince of Botan. He was the scion of a family that traces its descent back to the days when Abdul Aziz, son of the Khalif Umar, built the town of Jezirat-ibn-Umar on the banks of the Tigris; it has been the capital of the principality of Botan ever since.

Throughout the 19th century, a Kurdish national movement had been gaining ground among Kurdish notables held in Residence FORCÉE in Constantinople, and around 1887 they decided to publish a newspaper to foster this movement. As this was impossible in Turkey, Miqdad Alí Bedir Xan (Midhat Bey) escaped to Cairo, where he published the first Kurdish paper, which he called KURDISTAN. Due to the absence of an established alphabet and the turbulent times in general, the first issue of KURDISTAN was not published until April 22, 1898. Miqdad Ali Bedir Xan wrote numerous times to the Sultan of Istanbul for permission to publish his newspaper in Istanbul, but always in vain. During the 4 years of its existence, KURDISTAN was printed at different times in Egypt, England and Switzerland – where the last two issues (31/32) were published on 14 March, 1902.

The rise to power of the Committee of Union and Progress, and its publication of the new Turkish Constitution, induced the Bedir Xan family to return to Constantinople, and in 1908 the Kurdish nationalists formed a political society (the Kurdistan Taali ye Taraki Jamiyati), of which Emín Alí Bedir Xan (Amin Aali Bedr Khan) – Jeladet’s father – was a founder. For a while, this society was able to work in the open with the apparent approval of the Young Turks, but in 1912 it became clear to the Kurds that the C.U.P. meant to suppress them. The society went underground and its leading members, including Emín Alí Bedir Xan, went abroad. When Mustafa Kemal first came to power, he led the Kurds to expect a liberal policy intended to assimilate all Kurds in Turkey into the Turkish nation.

The Bedir Xan family was again compelled to leave Turkey as exiles, and they lived for a while in France and Germany. In 1927, at a conference of Kurdish nationalists, a committee was formed, called the Xoybún (Hoybun), to coordinate the movement. Jeladet Alí Bedir Xan was elected as the first president of this committee.

Jeladet has told W.G. Elphinston that he had to work for a living while he lived in exile, and that he worked as a gardener, a waiter, a house-painter and a typesetter in a printing works. It was the knowledge that he gained at this last occupation that enabled him to single-handedly print and publish a Kurdish journal, HAWAR, when in later years he lived in Damascus. He used his invented northern Kurdish-Kurmanjí dialect of Jezire, a Latin-based scripting system which is currently used as the standard northern Kurdish alphabet. He published the Kurdish grammar lesson “Bingahína réziman Kurdí” through the paper. HAWAR was published from 1932 to 1935 and from 1941 to 1943.

Jeladet’s invented Latin-based script for the Kurdish language (North-Kurdish dialect), which is still used among the North-Kurdish speaking Kurds, shows various flaws, particularly regarding certain sounds that exist in other dialects but have no written counterpart in his alphabet. Take, for example, the trill /r/ and velar /l/, one needs to be able to differentiate ‘Ker’ (donkey) from ‘Ker’ (deaf), and ‘Gel’ (people) from ‘Gel’ (distance between the legs). ln any case, all these publications and activities were forbidden when the French left the territory. The French left Southwest Kurdistan without any particular guarantees for the Kurds regarding the newly founded Arab nation of Syria.

Jeladet sought cooperation with other Kurdish scholars of his time, who were also looking for a Kurdish scripting system. If he had succeeded, the Kurdish people today would in all probability have a better Latin alphabet. In regard to this issue, J. Bedir Khan replied to a reader’s inquiries about unifying the written language system, including cooperating with linguist T. Wahby, in HAWAR as follows:

“Yes, we are aware that the distinguished linguist, dear Tewfiq Wehbi Bey has also codified an alphabet based on Latin characters. We met once in Damascus, introduced our proposed alphabets to each other and compared them together. There were some differences in them. We both were interested in unifying and publishing our alphabets as one version but at the time my dear beloved brother indicated his alphabet was not ready yet and some more work was needed to complete it. Therefore the unification of both alphabets was delayed.
Tewfiq Wehbi Bey then returned to Iraq where, as you all know, unpleasant events took place. In spite of all difficulties I sent him several letters, but I did not hear from him. Later I realized that my letters have not reached him. Indeed the publication of “Hawar” was delayed for this reason. “Hawar” came out in May but I have had permission to publish since 26 October 1931 and was ready for the publication of the first issue by February. On four occasions I waited so the dear brother (T. Wehbi) and I could together introduce such a version of alphabet that would prevent any future disagreements. As I said above I did not get any response. I could not wait any longer.
That is why we started to publish “Hawar” and we introduced our own alphabet to both Kurds and others. We now have an achievement at hand, an alphabet and a magazine. For me the most appropriate thing for the time being would be to do our best in order to advance this alphabet until such a day that circumstances leave us no choice but to modify it.
Having said that I must reiterate, that we are always eager to achieve unity and the aim of our endeavour is exactly that. We are advancing with steadfastly steps towards our aim and we will not stop. As our initiative has already been delayed, we can no longer afford to wait any longer.
Many thanks to dear Pirot who presented the opportunity for me to explain the issue.

Jeladet concentrated then on the development of Kurdish culture, and in his publications HAWAR and RONAHI – the latter being illustrated – he strove for a cultural unity among the Kurds by reminding them of their old traditions and their folklore.

Jeladet believed that Kurdish language could play a major role in unifying the Kurds and their struggles for the right to self-determination. He lived in an era (post-World War I) when on the Kurds repeatedly lost the chance to establish their own country because they were so disunited in voice. As he replied to another reader on the issue of the great Kurdish homeland:

When the war was over, Jeladet remained in Damascus – but his brother Kamuran Bey went to Paris, where he opened a Bureau of Kurdish Studies, from which he hoped to keep the Kurdish question alive in the western world. He addressed a petition to the Secretary of the United Nations asking that the principles of the Atlantic Charter and of the Charter of the United Nations Organization be applied to the Kurdish minorities in Turkey, Persia and Iraq. The first official map of Kurdistan presented by the Bureau of Kurdish Studies and the Kurdish League Xoybún (Khoybun) to the San Francisco Conference on March 30, 1945.

This biography was prepared by Dilan M R Roshani 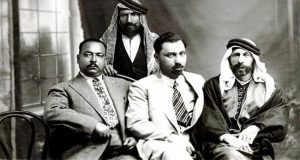 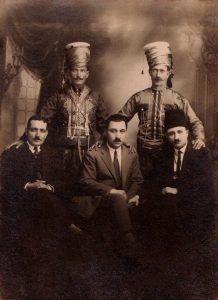 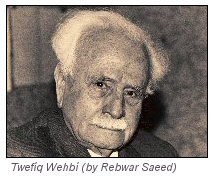