Like other non-Arabic speaking peoples who adopted the Arabic alphabet after the Islamic conquest of the seventeenth century, Kurds have started using a modified version of the Arabic script to suit the phonemic system of their language from the beginning of the last century. The changes introduced before the present century were modest compared to the extensive reform carried out especially since the 1920’s. The Arabic version of the Kurdish alphabet with all its practical difficulties is now to a great extent standardized, although spelling remains a serious problem. This section view a historical as well practical usage of existing Kurdish orthographies.

Kurdish codification and attempts to create a dedicated alphabet for Kurdish have had a long journey and continue to be a major issue in the Kurdish standardisation process (D. Roshani 2010). This is explained in a Kurdish Orthography Timeline, which dates back to the 1780s. (See A Kurdish Orthography TIMELINE)

The principle one letter for each sound, called phonemization here, lies at the heart of all codification efforts in orthography. its validly has not been questioned by any Kurdish source in recent times yet, even though it has at times been carried to the extreme of attempting to represent some of the allophones.

Phonemization of a more limited scope has been undertaken by other languages using the Arabic script. The Persian were probably among the first to use diacritical marks to represent constant phonemes /p/, /ç/, /ž/, and /g/ by پ , چ , ژ and گ , which do not exist in Arabic.

The Arabic alphabet currently used for writing standard Arabic consists of 28 letters (29 if hamza representing a glottal stop, written as ﺀ, and Romanized as ‘) is counted as a separate letter. There is one-to-one correspondence between the constant phonemes (numbering 28) and the consonant letters, three of which (ی , ا and  و) are also used to represent as a separate their “long” vowels /ā/, /ī/ and /ū/ and, in digraph form, two diphthongs. Three “short” vowels are not represented in the alphabet, although they can be represented in special texts such as Koran, dictionaries and primary textbooks by vowel sign or diacritical marks, namely:

A small circle or semicircle, sukūn, indicates the absence of a vowel. The insufficient representation of the vowels, together with other problem related to the shape of the letters (e.g., their cursive nature, a great number of letter-variants and numerous dotes), have led many Arab reformers since the mid-19th century to either improve the existing system or to replace it by the Roman script (Chejne 1969:157-61)

The problems with this alphabet increase when it is used to represent the phonemic repertoire of the Kurdish language -29 consonants and 9 vowels. Eight of the consonants /p, v, ĺ, ř, ç, j, g/ do not exist in Arabic and as a result, do not appear in the alphabet. Of the nine vowel only three /a, î, û/ (similar to Arabic long vowels) have been traditionally represented by ی , ا and  و as the case with Arabic. The complication was, however, more serious in Kurdish since one letter, ی , was to represent four front vowel /î, ê, I, ö/ while و , was used for three back vowels /u, û/ and /o/.

A. The consonant letters

Earlier Kurdish texts have adopted the four Persian letters پ , چ , ژ and گ representing /p, ç, j, g/. These letters were formed by adding diacritics to those letters of the Arabic language ( ب , b, ج c, ز z, ك k) that represented the closest equivalents for the Persian phonemes. The diacritics, including subscript and superscript dots and a diagonal bar already existed in the Arabic alphabet. The earliest records of the addition of dots to Kurdish ف /f represent /v/ ڤ are found in Khalidi’s dictionary (1892) and the periodical Kurdistan (1898-1902). The availability of letter-types in the printing presses of the Ottoman Empire indicates that this letter was borrowed by the Kurds.

Distinctions in writing between palatal /l/ and velar /ĺ/ or flap /r/ and trill /ř/ have not been found in scribal literature. The Arabic letters ڵ /l andڕ /r have been used for the two pairs. The earliest marking of /ĺ/, in print is probably to be found in Incîlî Merqus, Markus-Evangelium (in Mukri Kurdish) publish in 1909by Druckerei Awetaanian in Philippopel (Bulgarian) in which the phoneme is written by adding the diacritic ˇ mark above ل. The same was used in a translation of the four gospels published by the American Bible society in New York in 1919.

In 1923, the Iraqi Ministry of Education commissioned Lieutenant-colonel Tawfiq Wahby, a native of Sulaymaniya, to compile a Kurdish grammar to be used in primary schools. Wahby found it necessary, for the purpose of teaching, to reform the Arabic alphabet by adding diacritical signs. However, the Ministry rejected any meddling with the alphabet. Other attempts at reform by the compilers of primary textbooks were also rejected (cf. 8.2.6). In nonofficial publications, however, various individuals proceeded with the reform. In 1929, Wahby published his Destûrî Zimanî Kurdî (Grammar of the Kurdish Language), where he added dots to the existing letters to represent /ĺ/, /ř/ and Sulemani [o] (cf. 8.1.1). During the same year, Zarî Kumancî began writing /ĺ/ with three dots over ل (No. 16, January 7, 1929, p. 11). His effort was, however, impeded by the unavailability of appropriate foundry type in the printing presses (cf. 7.1.7).

Due to the absence of appropriate letters, Kurdish authors had to use doubling of ل and  رto represent /ĺ/ and /ř/. As more type became available, the use of v over ڵ and  ڕ  soon replaced that of doubling and dots. Kurdish printers could not afford the casting of new letters. In fact, as recently as 1955, Giw Mukriyani was still using the numeral ٧ / 7 instead of diacritics (cf. 7.1.7 and Figure 3). By the late 1950s, however, new letters were cast and the Ministry of Education finally sanctioned the innovation which had become widely accepted (cf. 7.5.4).

Another popularized innovation is the systematic use of hamza to represent the glottal stop which regularly occurs in initial position before vowels, medially in certain contexts and, in at least one case, in final position (ne’ ‘no’). Following the Arabic and Persian tradition, old Kurdish texts represented the initial glottal stop by ا (alit) which, in its ideal Arabic form, in. Arabic, received the combined cumbersome sub- and superscripts آ , أ and إ (in simplified form  أ  , آ and إ). These initial hamzas have been phonemized in Kurdish as ئا /a ,  ئه/e , ئو/u    , ئێ/ê   ئی/î or i, etc. The following examples show the old and new system:

The earliest use of hamza in print is probably in Rojî Kurd (No.. 1, June 6, 1913, e.g., p. 40). It was inconsistently applied in the 192_02 in private, publications. Its increasing use is recorded in the periodicals, e.g., Rûnakî (1935), Gelawêj (1939-49) and Dengî Gêtî Taze (1943-47). By the 1950s, the innovation was universally applied. Another change introduced into the Arabic alphabet was the representation by letters of a diacritical [nark called shadda and written as a’. In the Arabic alphabet, shadda is put over a consonant to indicate germination. The diacritical mark is replaced in Kurdish by doubling the letter. Thus, the Arabic word مقدٌس  /mugaddas ‘hallowed, sanctified, etc.’ is written in Kurdish as موقه‌دده‌س /mugeddes/.

B. The Vowel Letters

As was indicated above, the Arabic alphabet does not have enough letters to represent even the six vowels of the Arabic language. Thus, three “short” vowels /a, i, u/ are represented by diacritical marks while three long vowels /ā, ī, ū/ are graphemized by letters that also represent consonants. This shortage of special letters to represent the more numerous vowels of Kurdish poses a serious problem for phonemization.

A tendency to represent vowels by replacing Arabic vowel signs (i ‘rûb) with letters (nûsînî i’rab be herfì ‘writing the diacritics in letters’) is found in earlier texts where ی , و and ٬ are used instead of the three vowel signs ـَ ـِ and  ـ٫:

The replacement of the three vowel signs could not, however, finalize the phonemization process, since و alone had to represent, not only the consonant /w/, but also the four vowels /o, ö, u, û/ while ی was being used for /y/ and three front vowels /ê, i, î/. In 1913, the magazine Rojî Kurd had proposed eight letters, some of them new, to represent the vowels (No.2, July 6, 1913, pp. 12-13). The letters were borrowed from a Turkish alphabet reform society, which had proposed a revised version of the Arabic-based Turkish alphabet. This sweeping reform did not leave its mark on the Kurdish writing system because of the suppression of the Kurdish language and the adoption of the Roman script in Turkey (cf. 5.3.0).

Graphemization of the vowel system was, however, making progress in Iraq. The situation in the early 1920s was as follows: 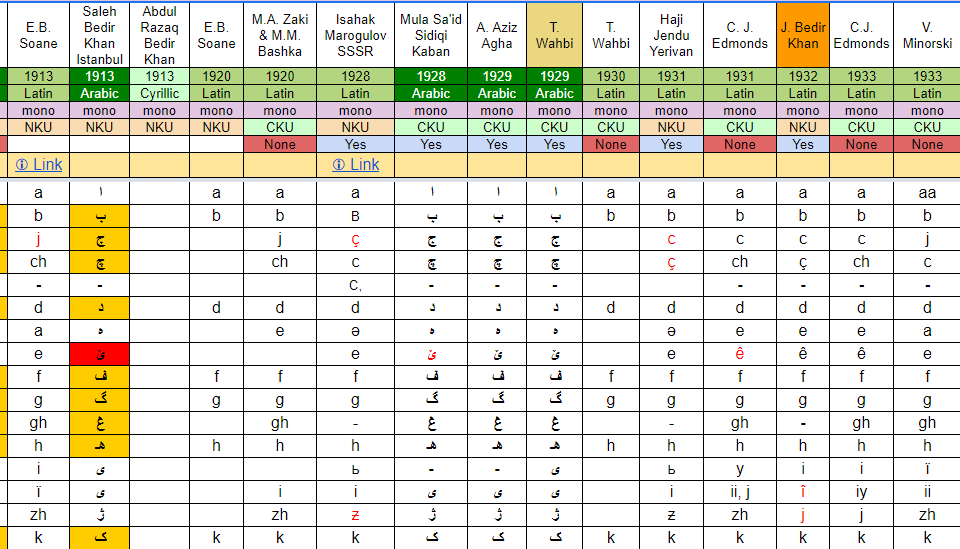